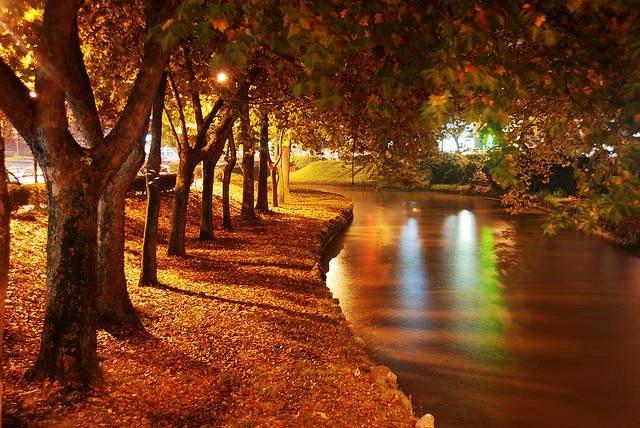 Trikala is a destination that we often visit and always have a great time. We go so often that I feel almost local. So today I’m going to share with you some details about this beautiful city.
Trikala is a city in northwestern Thessaly, Greece. The city straddles the Lithaios river, which is a tributary of Pineios. The region has been inhabited since prehistoric times. The first indications of permanent settlement have been uncovered in the cave of Theopetra, and date back to approx. 49,000 BC. Trikala city is built on the ancient city of Trikka or Trikke, which was founded around the 3rd millennium BC and took its name from the nymph Trikke, daughter of Penaeus, or according to others, daughter of the river god Asopus. The ancient city was built at a defensive location in between the local hill and the river Lithaios. The city became an important center in Antiquity and it was considered to be the birthplace and main residence of the Healing God Asclepius. Trikala in greek means three goods (tri-kala) but up until now there is a debate on what those three goods are. The sweets, the river, the food, the people? The truth however is this beautiful city has everything. A beautiful river full of swans and ducks runs through a city that is full of all ages cyclists and if you want to explore the general area you will be impressed by beautiful villages and the scenery. Trikala is the perfect base for exploring Meteora, Elati and Pertouli. 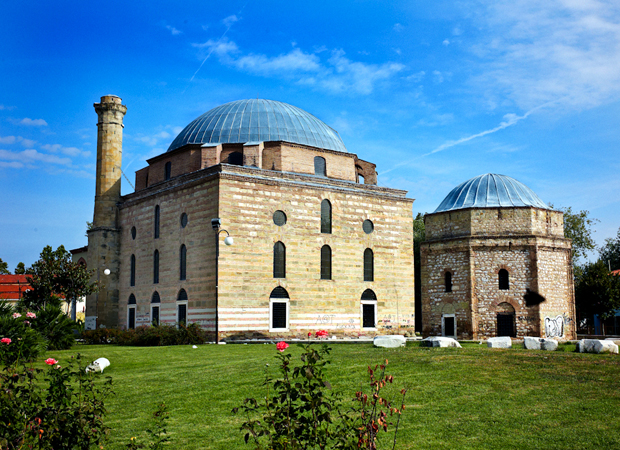 THE SIGNS OF THE EAST

The imposing Shah Osman or Osman Shah Mosque welcomes guests at the entrance of the city. This great mosque with the significant minaret – declared by UNESCO as a Heritage architectural monument – was built in 1557 and today, after the necessary restoration works houses exhibitions and cultural events. Attached you can find the octagonal mausoleum of the Ottoman prince Osman Shah, he was buried there in 1567.
This impressive complex supplements the baths (Hammam) that were recently discovered beneath the old prison building. Who could ever imagine that under the base of a penitentiary institution a whole system of turkish baths waited patiently (since 1896) to be found again. This discovery was the perfect occasion for a creation of a Archaeological Park. The best view of the city one can find at the famous Byzantine Castle. Located in the north of the city, was radically rebuilt by Emperor Justinian in the 6th century AD. and today stands on the ancient Acropolis Triki. Cross the main entrance and wander among the three tiers. Complete your visit to the Castle with a climb to the 33 m. Clock, a statement of the city. Take a deep breath and climb the 107 steps to the top, the view will reward you. 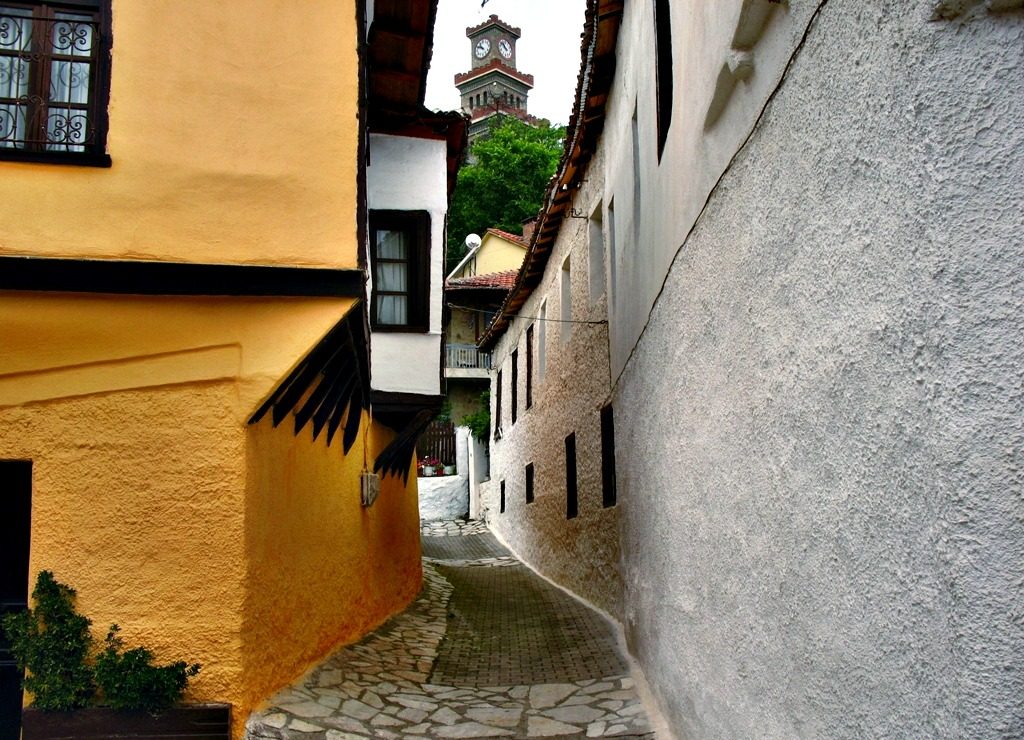 IN THE NARROW ALLEYS OF THE OLD CITY

Varoussi on the feet of the Castle, began as the Castle district. Later it was the Christian neighborhood in Ottoman years and remained as the high society neighborhood of Trikala until the 1930’s. There you will find some of oldest churches in the city and some elaborate old houses! The houses of the area are floored with porches and long eaves, exudes welfare of city residents in the last centuries of Ottoman years. Between Varousi and the Central Square you can find one of the most vibrant and unique neighborhoods of Trikala, Manavika (aka grocery stores), which takes its name from the vegetable market that operated there since 1920. The vegetable market no longer exists but lately most of the buildings have been renovated, the roads are now paved and instead of the old abandoned warehouses you can find traditional taverns, restaurants and bars transforming the area into the center of city’s night life. Once you find yourself there, look around for the huge wall painting that was created in 2006 by foreign artists on the visible side of a modern building. 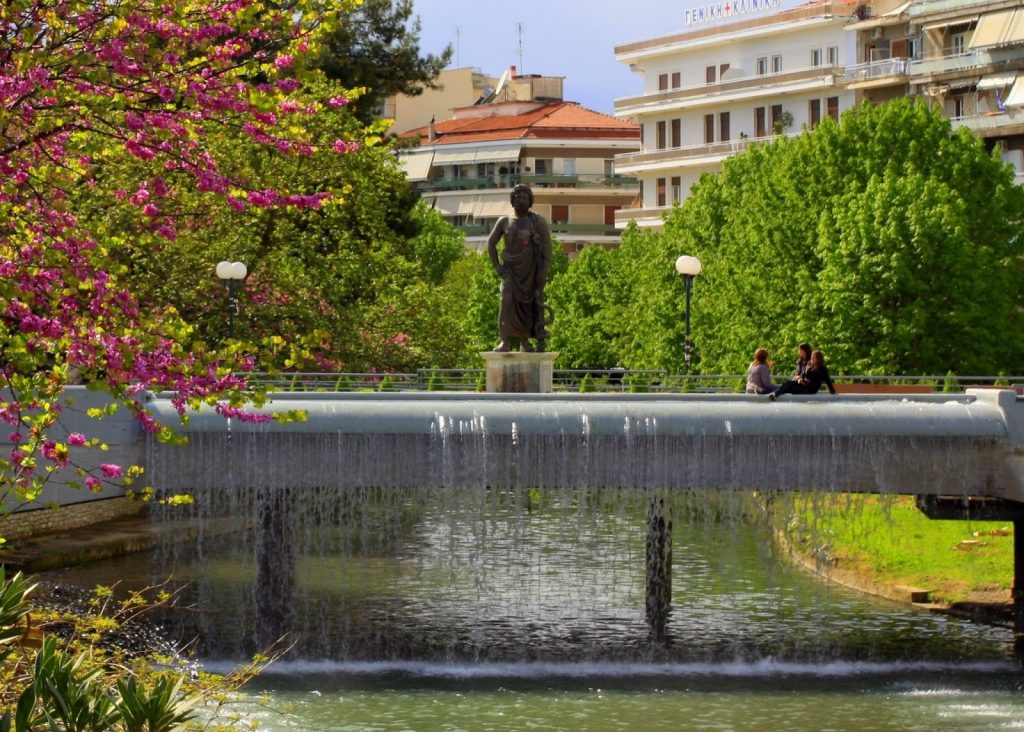 WALKING AROUND THE CITY CENTER

With Central Square Polytechniou as your start, cross the famous Central Bridge which connects the banks of Lithaeos river – make sure to stop for a while to gaze from above the waters and the swans and also the statue of Asclepius on the other side. Walking towards the pedestrian zone, you will find on your left the historic Hotel “Panellinion” operating since the early days of the last century and on your right the Hotel “Achillion”. You are at the starting point of Asklepios pedestrian street, the most lively street of the city. Since its opening, around 1890’s, has been established as a the main shopping street. 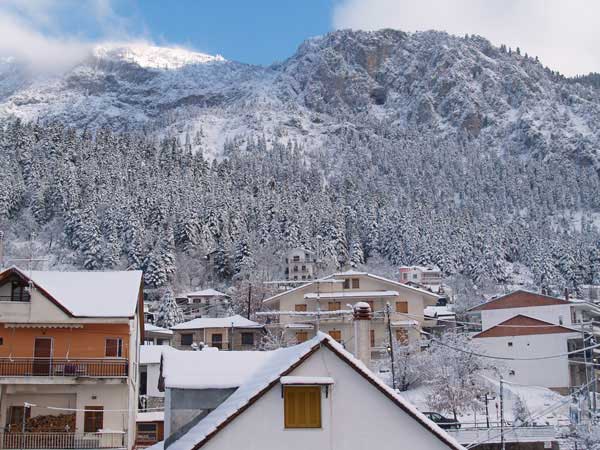 Locals may call it still with its old name, Tirna, but its new name says it all. Only 35 km away from Trikala, you can find this “swiss” like villages literally flooded by fir (elato) trees. Elati village is close to Pertouli Ski Center and that alone makes the village one of Greece’s best winter destinations. 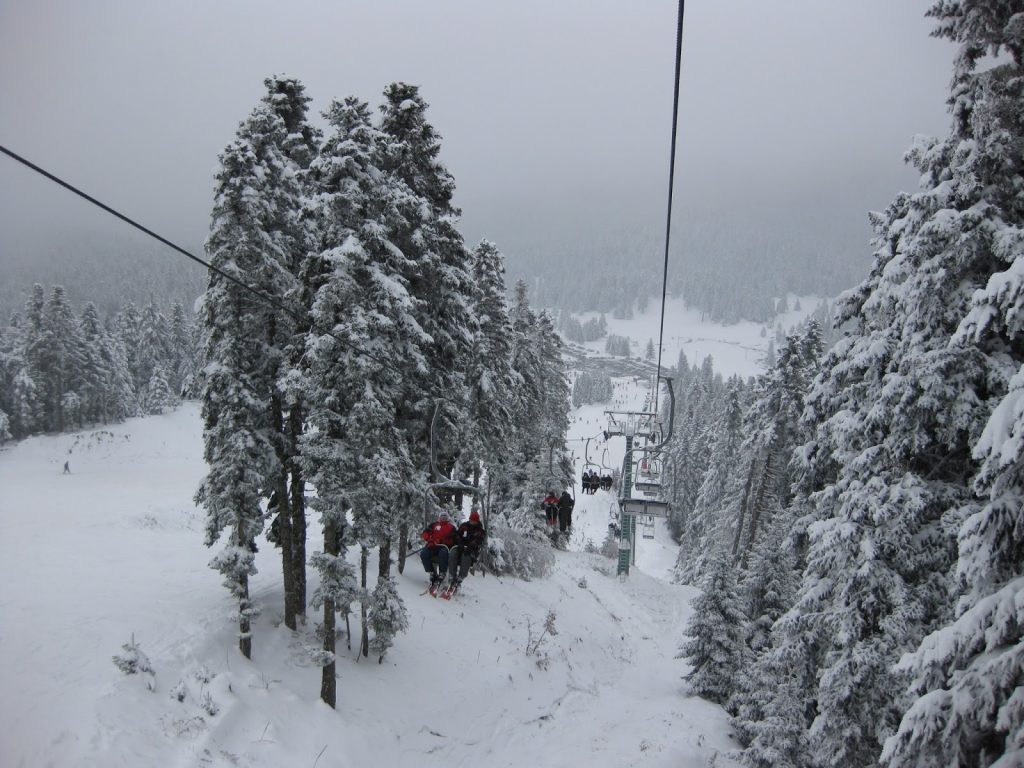 Next stop Pertouli Ski Center. Between the Pindos mountains of Koziakas and Loupata, you can find Pertouli Ski Center with 4 uphill slopes and three lifts. It may be relatively small, but it is easily accessible, suitable for families and friendly to beginners skiers. Even if you are not a skier, you can use the aerial lift for a walk or rent sleds and snowmobiles for exploring the snowy Pertouli fields. You can find two chalets in the Center, one downhill and one at the top where you can enjoy hot drinks and delicious snacks. 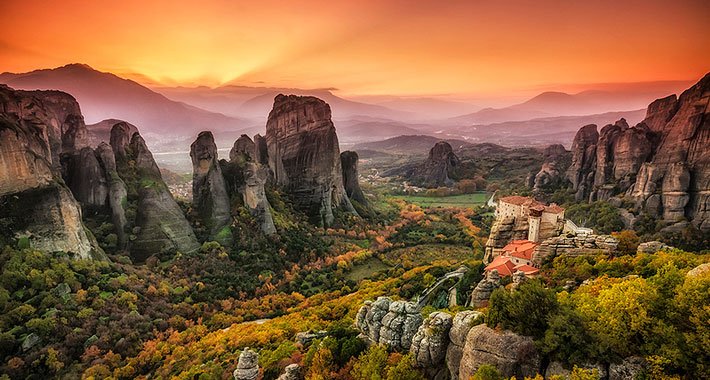 If you find yourself in Trikala, you have to visit Meteora! Just 21 km. from the city of Trikala, you will be speechless in front of a stone forest, the only one in the world. On the top of the rocks have been built monasteries which stand there for centuries … meteors between Heaven and Earth. Just stand for a while, take a deep breath and enjoy the magnificent view in front of you. From Mount Olympus to the Pindos Mountains and the Thessaly valley. Did you know that Meteora area attracts hikers and climbers from all over the world? 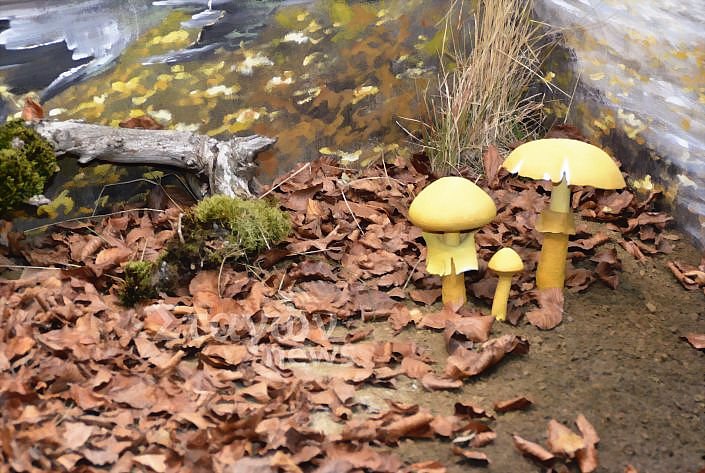 Being in Kalambaka, don’t forget to visit the “Natural History Museum of Meteora & Mushroom Museum”. There you will have the chance to see the wildlife not only of Greece but Europe’s and other continents too. Walk through the paths and admire the great variety of mushrooms in Greece. You can buy unique gifts from the gift shop and relax in the museum café. Don’t forget to visit the special shooting place and capture your visit in a photo, next to the animals. 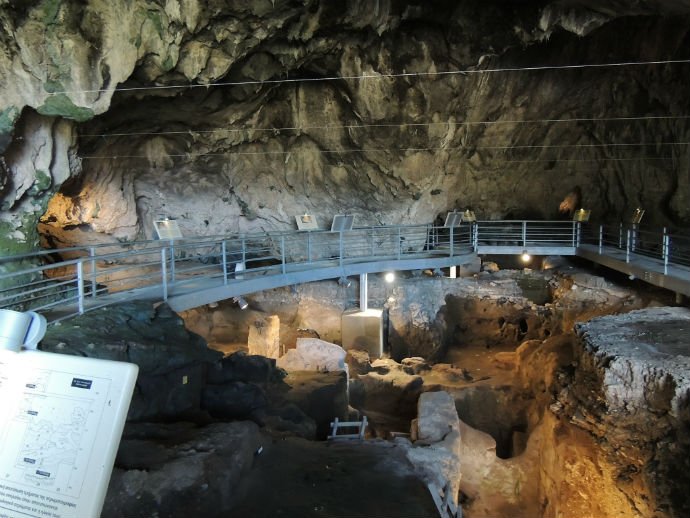 IN SEARCH OF PREHISTORIC HUMAN SIGNS

On the road Trikala-Kalambaka, about 3 km. before Meteora is impossible not to notice the rocky maze that rises above the Theopetra village on the northeastern side of which lies the Cave, a unique archaeological site. This is one of the most historically interesting caves in Greece. The Cave is situated at an altitude of 100 m. above ground and 280 m. from the sea. In front of the cave the Litheos river is flowing. Moving inside, you find the main room of about 500 sq.m. It is the first cave that have excavated in Thessaly and has great historical significance as it is the only one in Greece with continuous anthropogenic layers starting from the Middle Stone Age and up until the end of the Neolithic. It is noteworthy that the human signs that were found there – a extremely rare find for both Greece and Europe – are dating back 130.000 years ago.